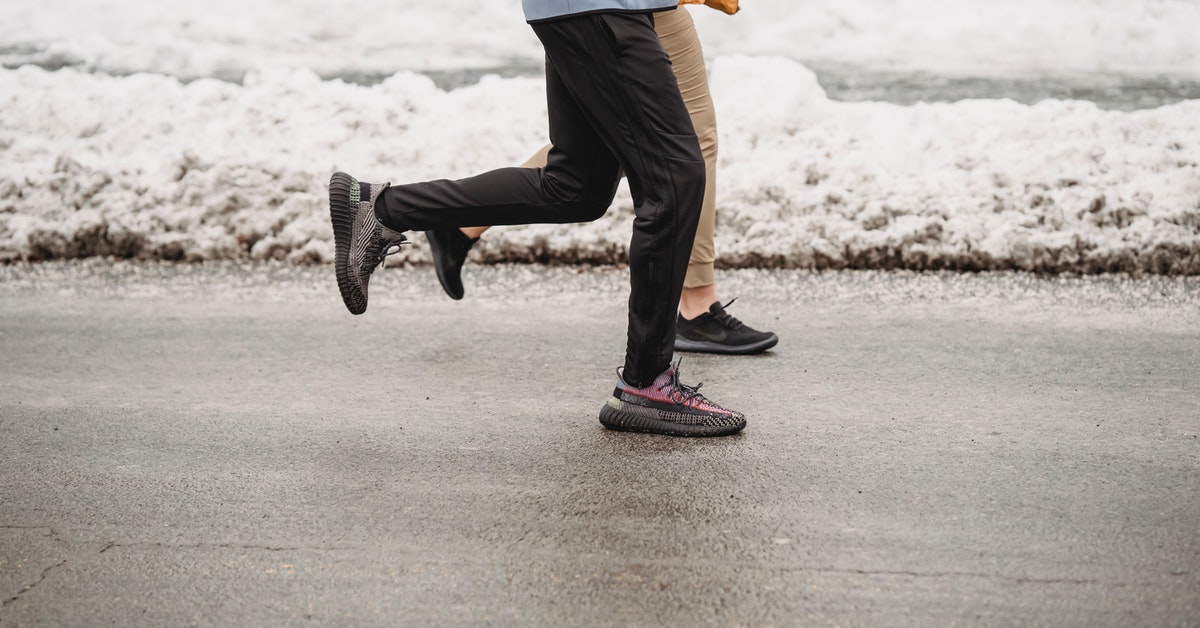 Who doesn’t want a perfectly beautiful summer body after a hard winter? It’s true that there are gyms all around, but doing a cardio exercise like running has its own benefits. The question that clicks my mind here: is running in the cold good for you? You will get the answer by the end of this article.

Unfortunately for many of us, the cold temperatures can be highly demotivating. Especially if you’re a morning runner and feel zero desire to get out of the sheets and run around in the freezing weather.

But there’s the question of ruining your shape. After all, when we get out of our homes after a treacherous winter, we wouldn’t want to look like cavemen coming out in the sun for the first time. Weird body shape and an overall repulsive physique.

So the question is, is doing a cardio exercise, is running in the cold good for you?

Now before we dive into the answer and tell you: Is running in the cold good for you or not? We need to check some biological and scientific facts.

In winter, the outside temperature is really cold, and when a body is in a state of exercise, it generates heat. This, according to the law of thermodynamics, implies the rate of heat transfer between the body and the environment will be great. In simple words, your body will lose its heat faster.

The implication of this is that there will be chances of you going into hypothermia. Which is a core body temperature of below 90 degrees. And if that happens, things can get very nasty. From slowing down of your organs, including brain and respiration, to eventual unconsciousness.

But don’t worry. Hypothermia is slowly progressive, over days. And you’ll have warmed yourself up before you even knew you were hypothermic. But still, it’s something you ought to keep in mind.

Let’s start with the data from the centers for disease control and prevention. According to this, an average adult needs about 150 minutes of moderate aerobic activity per week to keep things going at an optimal level. This means you ought to do some moderately aerobic activity even in the winter.

A 2014 U.S study also showed that working in a relatively cold environment increases the amount of brown fat in the body. Now if you didn’t already know. Brown fat is a good kind of fat as it burns calories. Another study published in 2018 showed that exposure to a relatively cold environment increases the body’s energy expenditure by 30% (which is, by the way, a lot)

Now, what does it mean? It simply means that if you want to get thin, you should go run around amidst the white snow as your life depends on it.

Not though, just kidding. Don’t do that. You’ll get hypothermic.

Another study done by a Scottish team found out that the best temperature to work out, in the context of cold, is around 10 degrees Celsius. Any temperature lower than that and the body will start shivering. Although there’s still shivering above 10 degrees, it’s lesser than the kind that is witnessed below 10 degrees.

But shivering is good, right? The muscles contract and jerk violently, which requires energy, which is extracted from fats. Which means you’ll get thinner. Time to shiver, my love.  That’s another reason why you feel so hungry in winter all the time. But more on that some other time.

Don’t shiver yet. We still have some things to answer- Is running in the cold good for you or not?

There’s one final study we would like to point out and then we’ll move on. Promise. A study published in the British Journal of sports medicine showed that the chances of inflammation in the lungs are more when you breathe dry and cold air. They extracted these results by analyzing cross-country skiers.

However, they did point out at the end of the paper that more research is needed for full in-depth analysis yet since there are so many important variables to consider in cross-country skiers.

So Is Running In The Cold Good For You?

Well, keeping in mind all the studies we pointed out and all we didn’t, it depends on who is asking and why.

For Those Who Want To Lose Weight

Running is the best thing to do if you want to lose weight in a healthy, natural, and steady way. It lets your body’s muscles adjust to the decreasing amounts of fats. This will help you prevent a baggy look to your body., just like in people who go to the gym and start exercising to lose weight.

They gain muscle faster than they get rid of the fat and that creates a baggy look. Now without further diverting our attention. Let’s head to the main topic.

So, for those of you who want to lose fat. The answer to the question: Is running in the cold good for you is, Yes it is.

Yes, it is as long as you take the necessary precautions.

The run in the cold will be beneficial as long as you maintain a proper core temperature of your body. Not too high, not too low. Just the right temperature. And what was the optimum temperature? 10 degrees celsius, if you recall.

You have to make sure there is not too much shivering in your body as it can lead to loss of heat faster than the gain of heat, according to the law of thermodynamics we discussed above. If the loss of heat is greater than normal, you will be at a disadvantage. If the gain of heat is greater than normal. You’ll again be at a disadvantage as there won’t be enough shivering to help you get rid of extra energy.

How Do You Keep The Proper Temperature?

First of all, you should keep in mind that during intense cardio exercises like running, your body is generating a lot of heat. So that means it’s trying to be self-sufficient. Which is great.

Next focus on your clothing. If it’s too cold outside then you must dress heavily. But not too heavy to generate extra heat and let your body temperature rise above 10 degrees. Know that in cold weather, your blood flow will only be concentrated on your vital parts.

Mainly your head and torso. This is the reason why you feel extra cold in the feet, hands, and ears. They’re not so vital so the body decides to spare them from blood flow.

Hence, try to keep their areas of the body warm. Wear a muffler of some sort and maybe some thin gloves as well. Running shoes that provide good cushioning are a great option too.

Your dressing depends on the outside weather and your analysis of it. Just make sure you go neither too hot nor too cold. And make sure to maintain the optimum amount of shivering.

For Those Who Just Want To Stay Fit

For those of you who just want to stay fit, it is best to keep your body temperature at its core temperature. 37 degrees Celsius.

Again, it depends on how you interpret the outside temperature and your body’s response to it. Just remember that your body will try to keep its temperature as close to 37 degrees as possible. And you should allow it to.

How can you allow it? By dressing appropriately. Know that your muscles will generate heat. So you ought to analyze how much clothing you need to put on to make things for your body as natural as possible. Simulating the natural environment for it to work naturally. That is the key for those who want to stay fit by running even in the greyest of winters.

A Word of Precaution

Please know that when we say ‘for those who want to stay fit we mean guys and girls who want to maintain their body shapes and weight and all even during winters.

We by no means mean the people who are advised by health practitioners to stay fit by running.

Why we say this because of research that states that the chances of cardiovascular problems, blood pressure, for example, intensifies as the temperature goes down.

And this should make sense to you if you paid attention to what we said earlier. Blood flow in cold weather is directed to vital parts of the body. How is this flow regulated? The answer is simple. By a process known as vasoconstriction, which literally means vascular constriction.

By vasoconstriction, vessels to less vital parts of your body are constricted naturally so less blood flows through them and a major volume of blood passes through vessels supplying the vital organs. As the vessels are constricted, they increase the chances of blood pressure going up. By which process? We are not glad you asked because explaining the intricate phenomenon is out of the scope of this article.

Hence, if you are someone with major health problems, especially one that’s concerned with the cardiovascular system. The answer: Is running in the cold good for you, absolutely not. Stay at home. Do stretches. And wait for the summer.

Benefits Of Running In The Cold

Now that you have an overview of the data regarding running in the cold, it’s time we talk about the benefits of running in the cold because After All, it does seem like optimum weather to run if you’re not suffering from some cardiovascular problem.

As we talked about earlier, you feel more hungry in winners. The reason is that your body is continuously burning calories to keep its core temperature as close to 37 degrees as possible. This deprives your body of energy and hence you feel hungry, your body’s indication of needing more energy.

If this continues throughout winter, you eat like a monster and lie on the couch watching Netflix, you’re going to become a ball of fat in no time. The effects are heightened by your demotivation to go to the gym in winter. Because who goes to the gym in winter, right?

Thus, running out in the cold is one of the best ways to prevent weight gain.

It Helps Improve Your Mood

It is no wonder the grey winter days can be depressing. When you look out the window at the grey clouds, you remember the things you don’t want to. Your failures. Your lost dreams. How you lost yourself to the world… but don’t worry. You can just run it out.

The greyness of winter is scientifically proven. The lack of light, or the presence of an artificial one, as in winter, disrupts the secretion of a hormone called melanin that is involved in your mood and feelings of tiredness, etc.

Running can help you normalize the secretion of hormones and secretion of several other hormones, that despite their role in metabolism can also play a role in mood improvement. One such example is that of serotonin. As you feel hungry after a run and decide to eat something.

Serotonin is released to not only help you in metabolism but also enhance your feelings of well-being.

And that is for our analysis of the question ‘is running in the cold good for you? And if you’re still confused about the proper answer. Let’s put it simply like this: if you’re not feeling well, then running in the cold is not a good idea. But if you’re feeling well, then sure go ahead and have a nice run. But remember to pack up properly, so as to not give yourself an unwanted injury.

Check out these amazing running shoes that are specially designed for longer hauls and to withstand low temperatures.

Tags: Is Running In The Cold Good For You?, Running in the cold